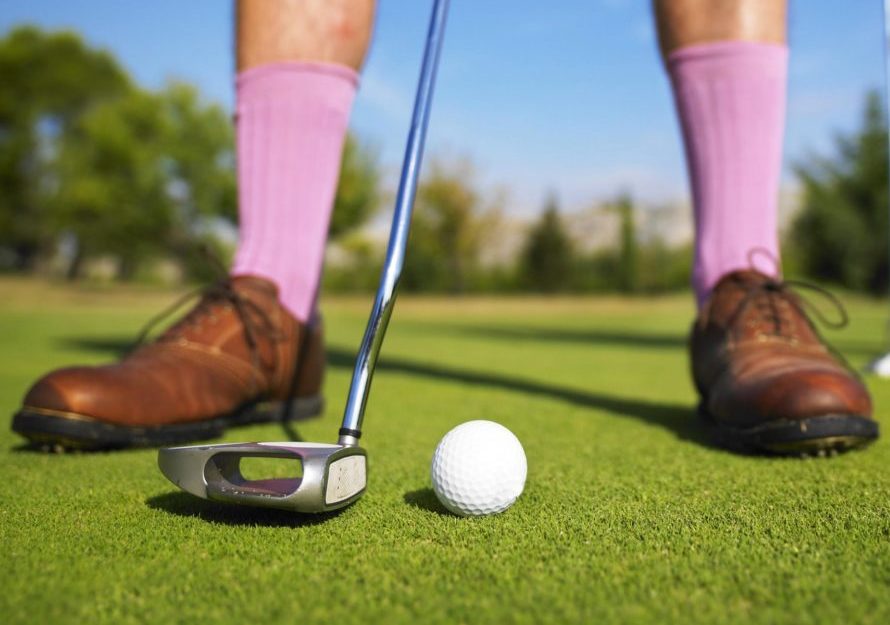 The term handicap has meant many things in our society, but in the world of golf, it means something very different.

Writing for many golfing publications, it has been something that we’ve had to wrap our heads around on occasions, reminding ourselves that ‘high-handicap’ doesn’t mean that you’re good at golf, quite the opposite.

Handicap is a quantitative measure of how good you are at playing the game, but it should not be confused with your actual golf score. The handicap is roughly the average number of swings that it takes you to get the ball from the tee into the hole.

It should not be confused with the score of the game you’re playing. 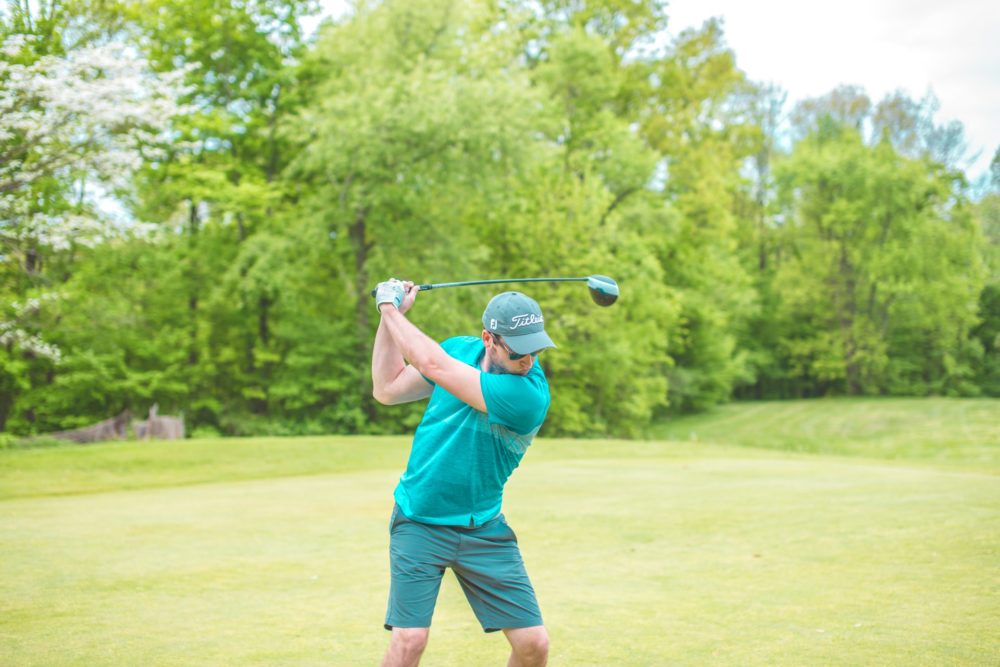 Yes, we know it might take a while to get your head around, but we’ll explain it more in-depth later in the article.

To the world outside of professional golf, these terms will seem incredibly confusing, so it is worth clarifying what a handicap means before delving into the meaning of ‘mid-handicapper’.

But how can you determine that you’re a low, mid or high handicapper? How are these averages determined and how can they prejudice people against you when you’re out on the course? What are the best clubs to help a mid-handicapper achieve that low handicap average?

Well, don’t worry newbie golfers, we’ve got an in-depth breakdown of the term handicapper, as well as a summary of some of the more bewildering golf terms. The more you know, the more confident you’ll be when ingratiating yourself into the golfing world.

We’re also going to distinguish between handicaps and golf scores to give you a better understanding of what these terms mean, as well as a list of some of the best golf clubs that a mid-handicapper can use.

What Is A Golf Handicap?

A handicap comes from a system developed by the United States Golf Association to create a fair and clear method of evaluating a player’s skill level. But it is far from an exact science, more of an estimate for players to judge their own skill level.

The system is meant to create a much more even playing field amongst golfers. It would be very unfair for a professional golfer to pit himself against an amateur, so the handicap system is meant to remove the inherent imbalance of this, sorting the better players into leagues.

This system determines how many strokes a player makes during each game. If you have a handicap of 6 and you’re playing against someone with a handicap of 15, you will have to give the 15 handicappers an extra 9 strokes to make the playing much more level.

The lower the handicap you have, the better golfer you are. A handicap, to stick with the dictionary definition, is that which impedes your game. If you have less of a handicap, then you have less getting in the way of your game.

For example, if you have a 3 handicap, you are generally considered to be a very good player.

Your Golfing Handicap Versus Your Golf Score

Do not mistake your golfing handicap for your actual golf scores, they aren’t the same. The handicap is simply a prediction of what you can expect to get during your game.

But how many games do you have to play before your handicap is determined? Generally, the best 10 scores out of 20 are used to calculate your handicap. You’ll probably shoot roughly 3 strokes over your par.

For example, if you are around an 11 handicap, you can be expected to shoot somewhere in the mid-range of about 80 in terms of score.

What Qualifies You As A Mid-Handicapper?

Mid-handicappers, as you might have already guessed by the name, are golfers that can be considered to be generally of an average skill level. But don’t worry about your handicap level being lower than the pros, you can always improve by playing more games.

Someone with a mid handicap is generally someone who has between 7 and 10, although it can go up to 18. Mid-handicappers shoot somewhere between 85 and 95 points per game. Statistics given by the USGA show that around 43 percent of all golfers are mid-handicappers – so there’s no need to feel bashful if you are a mid-handicap golfer, you have plenty of company there.

What Is The Best Golf Club For A Mid-Handicapper?

So, if you are a mid-handicapper, the chances are that you can hit your fair share of good shots and bad ones. But what equipment can you get to increase the likelihood of you achieving better shots?

Luckily, golf manufacturers have identified this target market of golfers who are desperate to improve and have developed certain shapes of clubs and club faces to increase your chances of success. These clubs are often called game-improvement or super game-improvement clubs.

If you are a mid-handicapper who wants to improve their games, one great way to do it is with a club that is designed with a larger central hitting zone, which will make your off-center hits still travel far down the fairway.

This means that even if you are slightly off trajectory, you can still get your ball as close to the green as possible. You will need a clubface that is very forgiving in order to achieve a solid responsiveness and great energy transfer from the club to the ball.

Hopefully, when you do graduate to the low handicap levels, you will be seeking clubs that reward solid striking and consistency of shots across rounds.

Irons are a perfect club for a mid-handicapper to be a better version of the person they were playing the previous golf game. A club really can improve your swing and mold itself to your unique playing style, hopefully making you a better golfer all round.

If you are a mid-handicapper, you should search for a club that will improve your game and help you get the ball higher in the air and further down the fairway towards the green. Think of this in contrast with the low-handicappers, who already have the driving power and swing speed and want a club that will help improve their accuracy.

Now that we have described a few of the subtle differences between irons for medium and high skill level golfers, here is a list of some of our favorite irons for mid-handicap golfers. Each club has a list of pros and a few cons to balance it out. 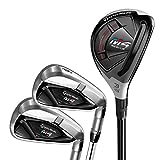 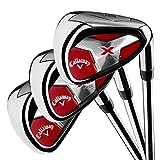 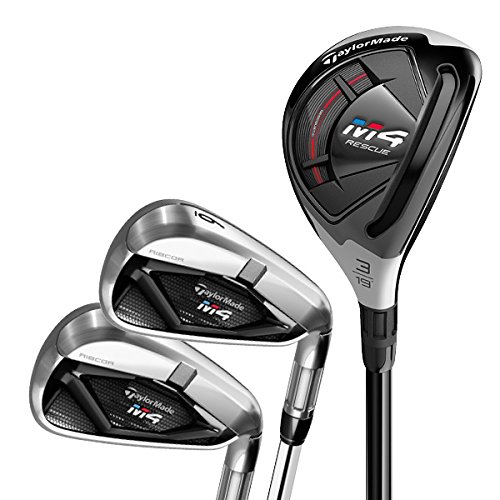 This iron is one of the more forgiving clubs on this list, with several features that will allow the mid-handicapper to drive the ball very hard down the fairway with accuracy and precision.

It comes with patented technology from one of the most reputable golfing brands in the world, helping mid-range players boost their game dramatically – introducing the TaylorMade M4 Combo (Hybrid/Iron) Set.

This iron will increase the distance of your ball in the air, the RIBCOR technology punching up the launch angle. It has a significant level or forgiveness and gives less sidespin, which is crucial for those long and straight shots off the tee.

This next golf club is a high-quality construction iron that is very forgiving on your swing and will certainly lead to an improvement of your game very quickly, categorized as a game-improvement iron.

It has a hollowed-out center, which means that the weight of the head is distributed easily across the head of the club, making for a smoother swing – introducing Cleveland Golf Men’s Launcher HB Iron Set.

This golf club has the forgiveness you need to ensure a long and straight shot down the fairway and onto the green. The hollow clubhead means that you’ll be able to swing the club a lot easier and drive the ball further and faster. 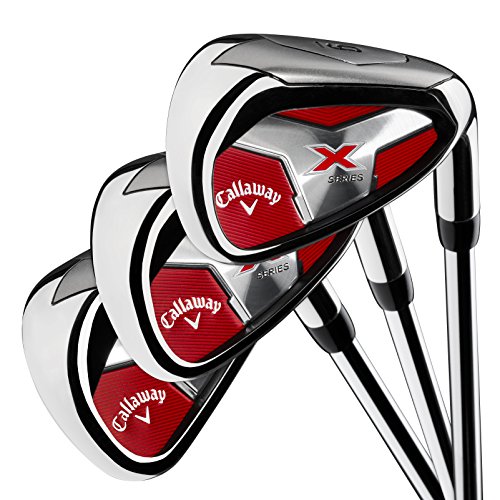 Our final club also has forgiveness as its middle name, with a design that is weighted in the perimeter, with a cavity-backed design that gives excellent shot quality, the lighter clubhead delivering a faster swing and a further drive for the ball – introducing the Callaway Golf Men’s X-Series 2018 Irons Set.

This club comes with a decreased center of gravity that makes for a decent swing and good forgiveness. It will send your ball long and straight down the course without issue, even if you find yourself striking the ball an inch or two off-center, it will make sure you’re sticking to the fairway.

Golf is no different than any other sport in that it requires time, practice and patience to improve your game. There will certainly not be one single piece of equipment that will improve your game immediately, although they will help to hone certain aspects of it that you might regard as weak.

If you rely solely on practicing, then you’ll hit a ceiling and your game really won’t improve. You have to become more adaptable as a golfer and learn to use different types of club with different weights in the head, hosel shapes, etc.

But hopefully this article has given you a better understanding of the handicap system and a clearer estimate of where on the system you rank and what particular aspects of your game – whether the swing, equipment or stance – that you might need to improve.

© 2022 Barry Rhodes Golf: Gear Reviews and How To Play