A launch angle in golf is another way of saying ‘loft’. If you’ve been following golf for a while now you will have heard the term ‘loft’ many times, but you might still be uncertain of what it’s all about.

In case you missed the memo, we’ll give you a quick rundown of the loft and what it’s all about.

The loft is how much the clubface angles back. The higher the loft, the steeper the angle. If you can’t imagine it, think of what we’re saying like this. A driver’s clubface is very flat and doesn’t angle back at all, meaning that the loft is very low.

On the other hand, a sand wedge’s clubface slopes back steeply and therefore has a higher loft.

The higher the loft, the higher the launch angle. This means that if you hit a ball with a high lofted club the ball is going to travel high into the air without crossing much distance. Picture the ball flying up into the sky and landing mere feet away from the starting position.

A lower lofted club will allow the ball to travel much further as it won’t be flying too high into the air. For this reason, drivers and the lower numbered irons have less loft because they are used more for distance rather than high trajectories.

So, now that you know a little more about what loft is, let’s answer your question about which golf club is designed to hit the ball with the highest launch angle? 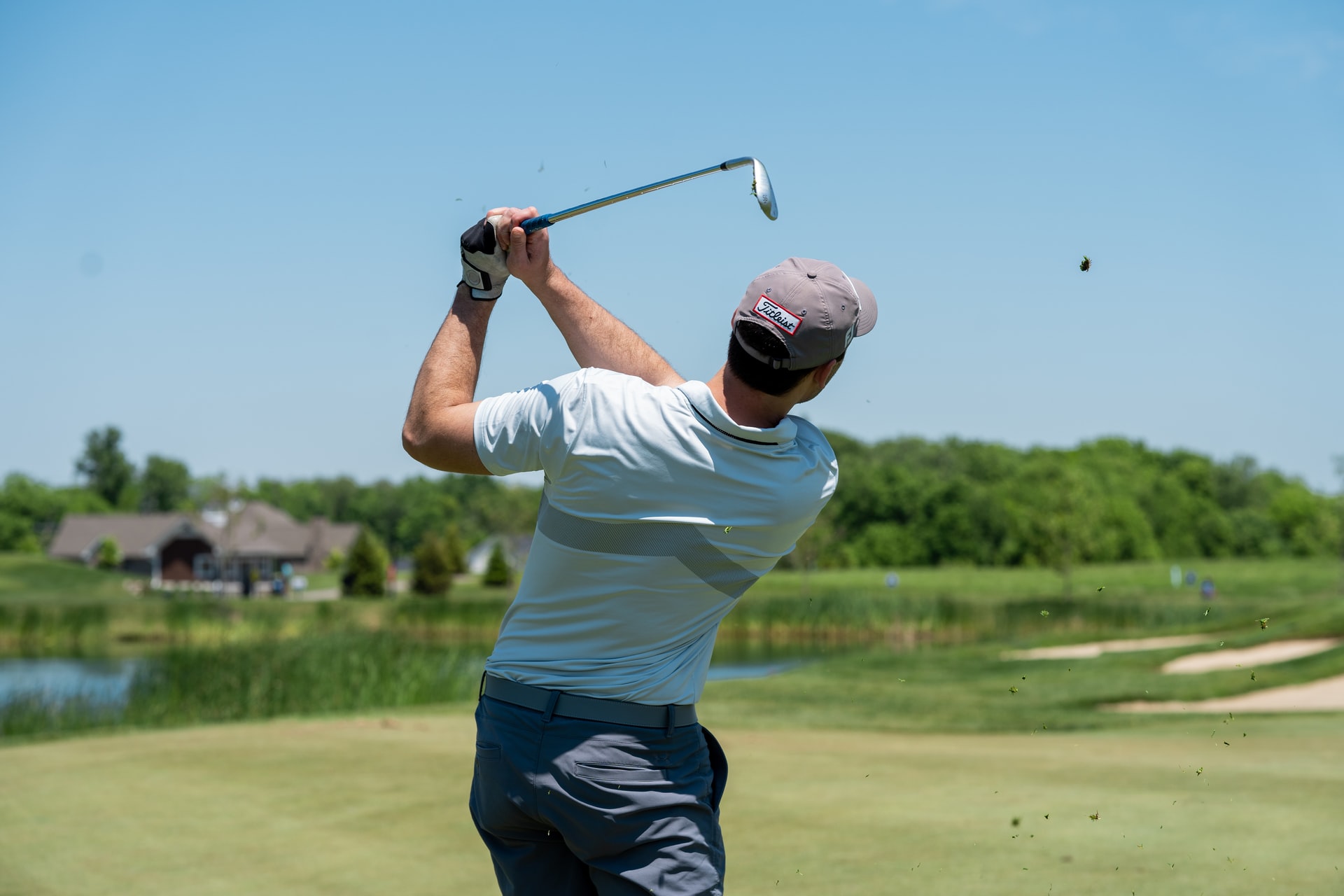 So, Which Golf Club Is It?

Although every golf club manufacturer is different with their degrees of loft for each club, the one that’s designed to hit the ball with the highest launch angle is almost always the lob wedge. Wedges come with a high degree of loft as it is, but the lob wedge usually boasts a degree of 60 or higher.

Does this mean anything to you? If not, let’s give an example of a lower loft angle compared to a higher loft angle.

Of course, we’ve already mentioned that 60 degrees and above is super high and will cause your ball to go shooting straight up into the air. A lower degree of loft; however, can be seen on a 3-wood which usually comes with a loft of around 16 degrees.

The 44-degree difference between the lob wedge and the 2-wood will greatly affect how the ball reacts to a hit.

Why Does Loft Matter?

The loft of the club matters greatly because it affects the way the ball moves after impact. No matter how hard you swing the club, a ball is not going to travel very far in the distance if you’re using a club with a high launch angle.

You might be thinking: ‘Why does it matter? Distance is always preferred over launch angle!’ And unfortunately, you’d be wrong. Yes, the distance is most important when you’re on the tee shot or trying to get the ball closer to the end target. This is why the driver and woods usually have a lower loft than irons and wedges.

However, what happens when you hit the ball far off into the distance and it lands behind an obstacle or in a bunker? You are going to need a club with a high launch angle to get the ball out of a tight spot. This is why many golfers carry a range of golf clubs in their bags with them - every club has a purpose.

If you’re stuck between an obstacle and need to chip your ball over it, a high lofted wedge can be a lifesaver. The club will pop the ball right over whatever is in the way with lots of room to clear the landing.

Imagine that your golf ball was stuck behind a tree stump on the outskirts of the course. You’ve accidentally hit it here and have to go over the stump to try and save your game. Hitting the ball with a low lofted club will only cause the ball to project straight into the tree stump and knock it back to its starting position.

If you continue to use a low lofted club, you’re bound to be stuck here for a while. Instead, pick out a suitable high lofted club and chip the ball right over the stump. The ball might only land right in front of the tree stump, but at least you won’t have the obstacle in your way anymore.

You can then feel free to use a low lofted club to get your ball closer to the target. This is a typical example of how you’d use a club with a high launch angle to get yourself out of a disaster zone.

Lofts in All Forms

Below we’ll be taking you through the different lofts of each of the golf clubs and determining which is the golf club with the highest launch angle for each group.

The putter is the lowest lofted club with a loft of around 3.5 to 4.5 degrees. This is because when you’re trying to tap the ball into the hole you want it to roll across the green rather than jumping into the air.

Hitting a ball with a putter will offer it virtually no launch angle at all.

Woods have the lowest degrees of loft because they’re built for distance rather than height.

The higher the number of wood equates to a higher loft, but even the highest wood doesn’t offer a very impressive loft.

We’ll be honest - we’re not expecting much from the driver. We’ve already mentioned that the driver is the golf club designed to hit the ball with one of the lowest launch angles, so don’t get your hopes up for a high loft.

The driver’s loft measures in at about 10 degrees, but every manufacturer offers a different degree. Some go as low as 5 degrees whereas others can be around 12 degrees. These clubs are going to force the ball forwards rather than up, so the launch angle is going to be very low.

A number 3 wood (the driver is classed as the number one wood, just for reference) is the most commonly used fairway wood and it comes with a loft degree of around 15. The leeway for a number 3 wood is around 2 degrees more or less, depending on how far you want your ball to travel.

Number 2 wood will have a loft of around 12 degrees and number 4 would boast a 17-degree loft. Number 5 could show a 19-degree loft and the 7 wood a 21-degree. The higher the number, the higher the loft.

However, don’t be fooled into thinking that a 21-degree loft is going to get your ball out of sticky situations such as a bunker. Perhaps if the lip of the bunker was a couple of dozen feet away, but the 7-wood won’t help you if you’re right on the edge of the bunker.

Hybrid woods don’t come with a set loft because there are so many different hybrids you can purchase. Some beginners prefer hybrid irons and use them all the time while others tend to steer clear of them altogether.

However, if we take a look into professional golfers and what they play with, the typical loft of a hybrid is around 18 to 22 degrees. Again, this number is rather low and therefore will benefit you in terms of distance rather than height.

Irons are used to getting the ball closer to the target within a minimal amount of hits.

This means that, again, we’re not expecting the irons to offer much in the way of ball launch angles. We’ll be looking at eight different irons and how high the loft is for each of them.

The lowest number of iron comes with the lowest loft at 18 degrees.

This is the iron you would opt for when you needed an iron club to give you as much distance as possible.

The 3-iron offers a loft of around 21 degrees, which is higher than the former club but nowhere near as high as a wedge offers.

24 degrees in loft is offered by a number 4 iron,  making it great for both trajectory and distance.

The number 5 iron often comes with a loft that is around 27 degrees.

As you can see, the number is steadily increasing.

The number 6 and 7 irons have almost merged into one in recent years, with highly regarded manufacturers such as Callaway and Wilson pushing the number 7 loft lower and lower.

Traditionally the 7-iron would have a loft around 35 degrees, but nowadays they are coming with lofts around 31 degrees or lower. This number is more suited to a 6-iron.

Make sure that you check the loft of both your 6 and 7-iron before you purchase them, as there could be a chance that you’re wasting your money for two clubs that are essentially the same in loft.

You can see that we’re getting rather close to the highest launch angle that a golf club can offer, but the lob wedge still takes the cake.

Finally, the 9-iron is the iron with the highest launch angle, and that is of around 41 to 43 degrees.

Compare this to the 2-iron and you will see a great decrease in distance traveled, but an impressive increase in how high the ball can reach. 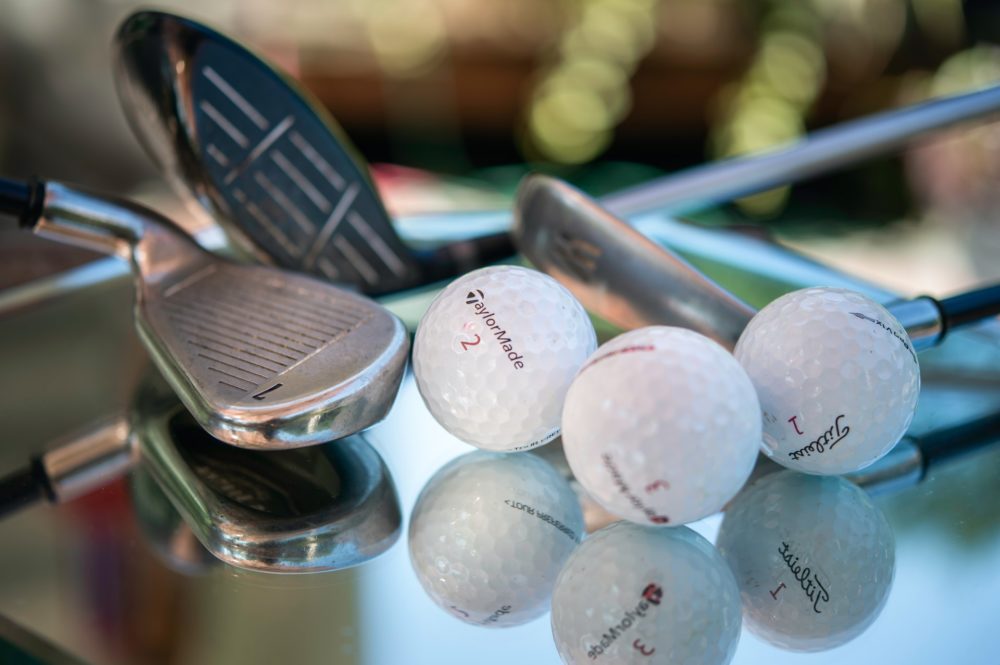 However, the wedges are all highly lofted and can offer your ball an impressive height. There is a reason why these clubs are called wedges, you know!

Pitching wedges come with lofts of around 45 to 47 degrees. Pitching wedges are the most popular wedge and therefore almost always comes in a set of irons, so if you’re using a set of clubs this might be the only wedge that you can use.

Pitching wedges are the best of its kind to offer an impressive height while still reaching decent distances. They can be used to hit the ball over large bodies of water of wide bunkers without getting stuck in them.

A gap wedge is not the most important wedge and therefore won’t often be included within an iron set.

However, a gap wedge is a good club that can be used if a pitching wedge is too much but a sand wedge is not enough. The average loft is around 52 degrees.

Sand wedges are the second club designed to hit the ball with the highest launch angle with a general loft of 60 degrees.

Sand wedges are used for getting out of bunkers when you have to hit the sand behind the ball rather than the ball itself.

We’ve already talked about the lob wedge so we won’t bore you with repeats, but the lob wedge is the highest lofted club at 60 degrees and higher. Phil Michelson uses a lob wedge of 64 degrees.

The golf club that is designed to hit the ball with the highest launch angle is the lob wedge, with the sand wedge being a close second.

All of the wedges, in fact, offer the ball the highest launch angle of any of the other clubs’ thanks to their high lofts.

If you’re looking for a club to offer a high launch angle, make sure to take note of the loft.